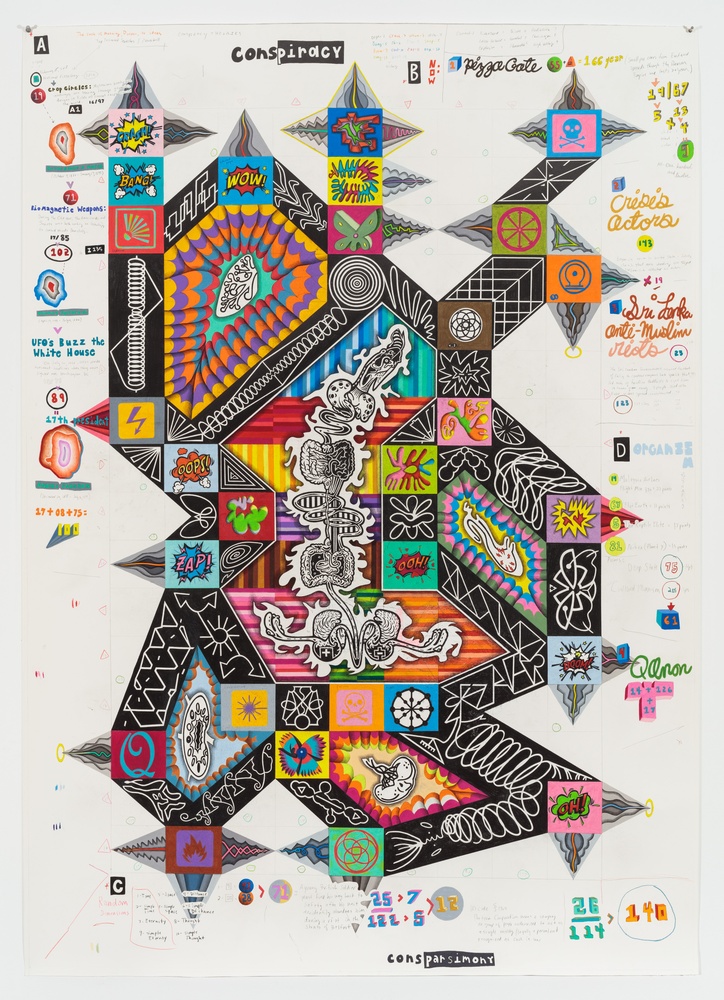 69.5 X 49.5 inches I’m interested in how false information, specifically vast conspiracy theories, are communicated in ways that cause people (sometimes ourselves) to believe that they are true. These intellectual beliefs then cause us to act physically – where we live, how we eat, crimes we might commit, etc. Like how the pizza gate believer actually showed up at the restaurant with a gun! For me, this drawing maps the language of conspiracy theories and connects their words into a shape that gives visual form to the phenomenon of belief. If we do not experience something directly, how do we come to believe it’s true? The way these conspiratorial ideas (usually of power structures) are encoded in the substance of their language unlocks our receptiveness to them. I think they speak to the instinctive or animal side of human beings and attempt to satisfy our need to know how the world / universe works. Like how a key’s shape fits into a lock – the various points (words) used in conspiracy theory’s ideas are formed in a way to ‘fit’ with our instinctive need to know and believe, much in the way religion does. PROCESS: To explore these ideas in this drawing, I first made a large grid across the paper and numbered the squares. I then researched different types of conspiracy theories (current, historical, mainstream and those on the fringes) and wrote - on the drawing - the words used to describe them. I then translated these words via an alphabet code into numbers, which I then correlated to a range of symbols – cartoon explosion sound effects, signs warning of natural disaster, etc. The cartoon sound effects functioned like epiphanies – like ‘wham’ I get it now! The various codes I used are sketched out around the drawing, along with each conspiracy theory’s total number of letters, which I then matched to the equivalent numbered slot on the grid. After locating each theory on the grid, I then connected them into a whole and filled in these connecting bands with white, mechanical structures framed against flat, black graphite. This whole structure was sort of like a physical body. In each of the spaces between the black bands, I drew (in black and white) a human body part – spleen, heart, pancreas, stomach, liver, and brain – to build on the idea of creating an organism The whole structure became a Frankenstein-like body, which was formed by an intellectual history of beliefs in false theories of how the world operates. Our collective mind built the hybrid physical body.