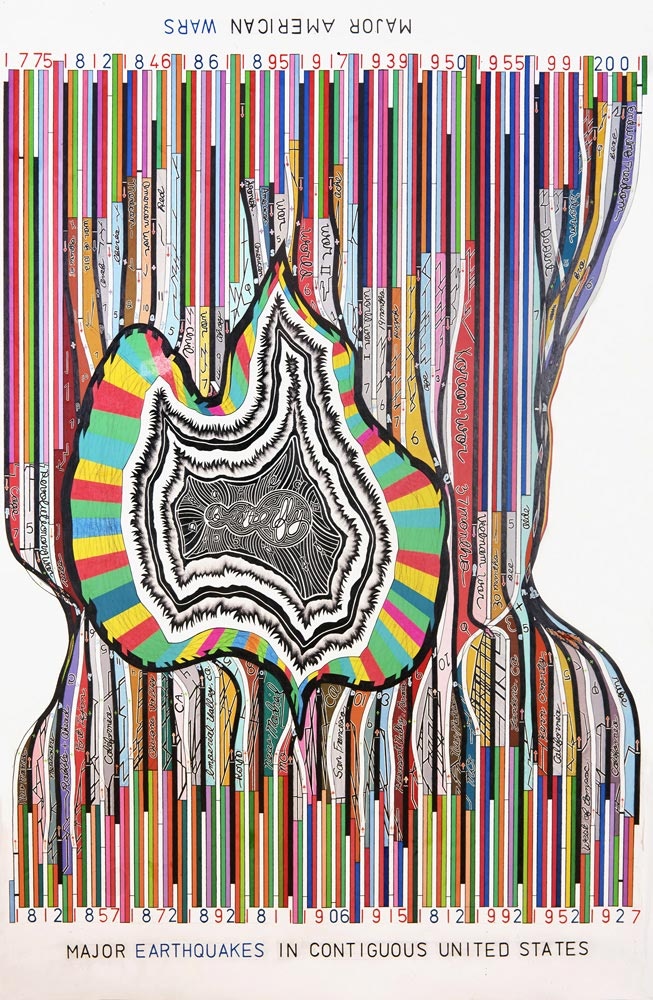 I began this drawing by recording the dates of the ten largest earthquakes and wars in the United States. I also recorded and included other pertinent information such as duration, location, severity, etc. The upper and lower stripes or bars correspond to the dates of the quakes and wars – the lengths of the stripes equal the dates (i.e. 1994 = 1 inch, 9 inches, etc.). I also developed a system to determine the color of each stripe. After I drew the stripes, I looked for patterns in the actual dates and the space(s) left between the sets of stripes. As with other works, I tried to look for similarities, an interconnectedness – principles or systems that may guide seemingly disparate phenomena. I tried various ways to create a form that would link the sets of bars and I eventually arrived at the organic central shape. To do this I measured from the end of each bar a distance based on the duration of the wars and the size of the quakes (translated into centimeters), and connected the resulting points. I thought of this process as a phase transition, in which one system is transformed into another. The information I placed throughout the drawing also relates to the conceptual similarities I observed. One concept that each phenomena seemed to have in common was the critical state, a kind of organization characterized by a tendency toward sudden and tumultuous change, one that seems to arise naturally under diverse conditions when a system gets pushed away from equilibrium. Another principle that I thought might determine the frequency of wars and quakes, was the butterfly effect. This effect, in which a simple occurrence can have much greater consequences, is what begins the process culminating in a critical state. I tried to make the central shape resemble the entirety of the butterfly effect, yet in reverse – it is at once a type of growth system and simultaneously a contained, definable form.