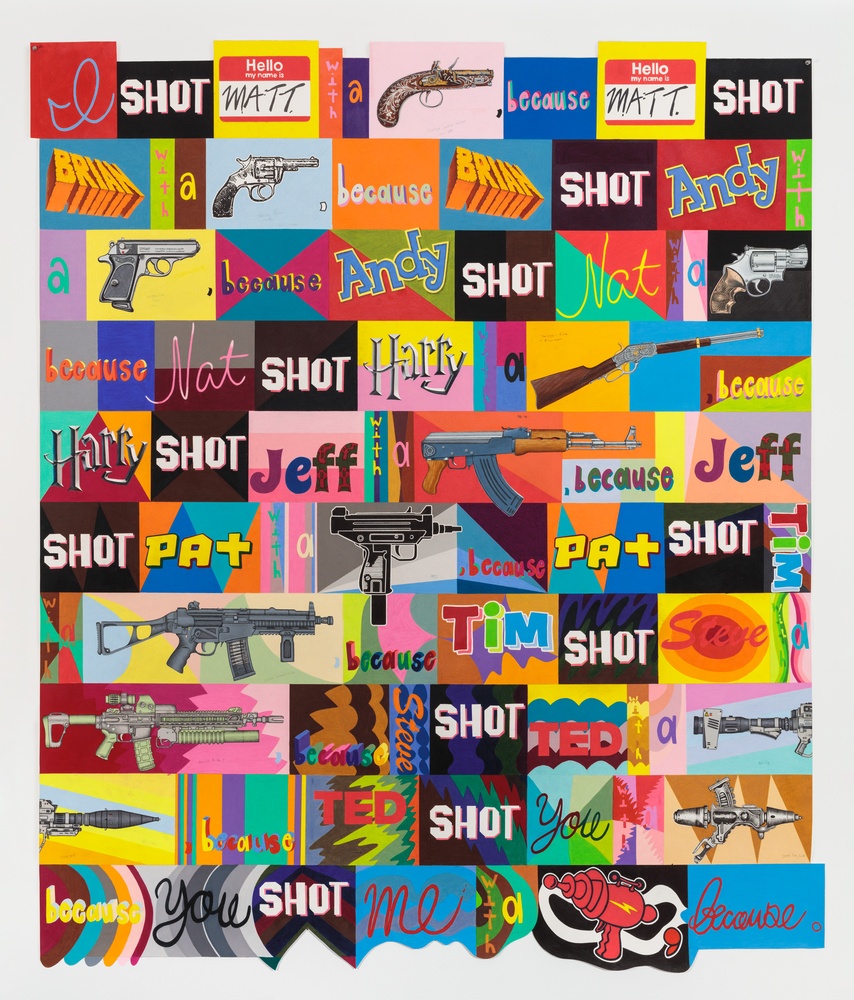 82.25 X 70.25" In this drawing, I was exploring how we come to act based on our beliefs, which is central to much of these new works. I was also thinking about the relationship between comic violence and the real acts themselves – the strange tension between real and fake violence. Also, I was interested in how human behavior is more complex version of computer coding (if, then, etc..) and why / how people follow orders given by authority figures that command discipline. One central phenomenon I’m exploring in this piece is the ‘Foot in the Door’ technique of compliance, which aims at getting a person to agree to increasingly larger requests by having them agree to a modest request first. In this work’s case, the piece escalates in terms of the type of gun used to shoot each person, and the coinciding drama becomes more and more unrealistic and ridiculous as the drawing progresses. PROCESS: • The name of each person drawn is someone from my childhood. Not one would shoot someone. • The guns progress from old and simple at the top, to newer and absurdly powerful in the center, to the final two guns at the bottom, which are from a video game and a cartoon. I thought of this like the argument of media violence as a gateway to actual violence in reverse – the real reason we shoot each other is not the fault of cartoons, but that guns have a vast and complex ‘real’ history (personal, military, constitutional) and has led in turn to contemporary proliferation of personal weaponry, violent video games, and the comic shootings in movies, tv, and cartoons. • As the violence escalates from left to right and top to bottom, I divided the bands of color in increasingly smaller increments. The piece developed in a Fibonacci-like way – the shots multiply and grow in regular, predictable increments, as if the recurrence of human violence is inevitable. The final line loops the piece back to its starting point.