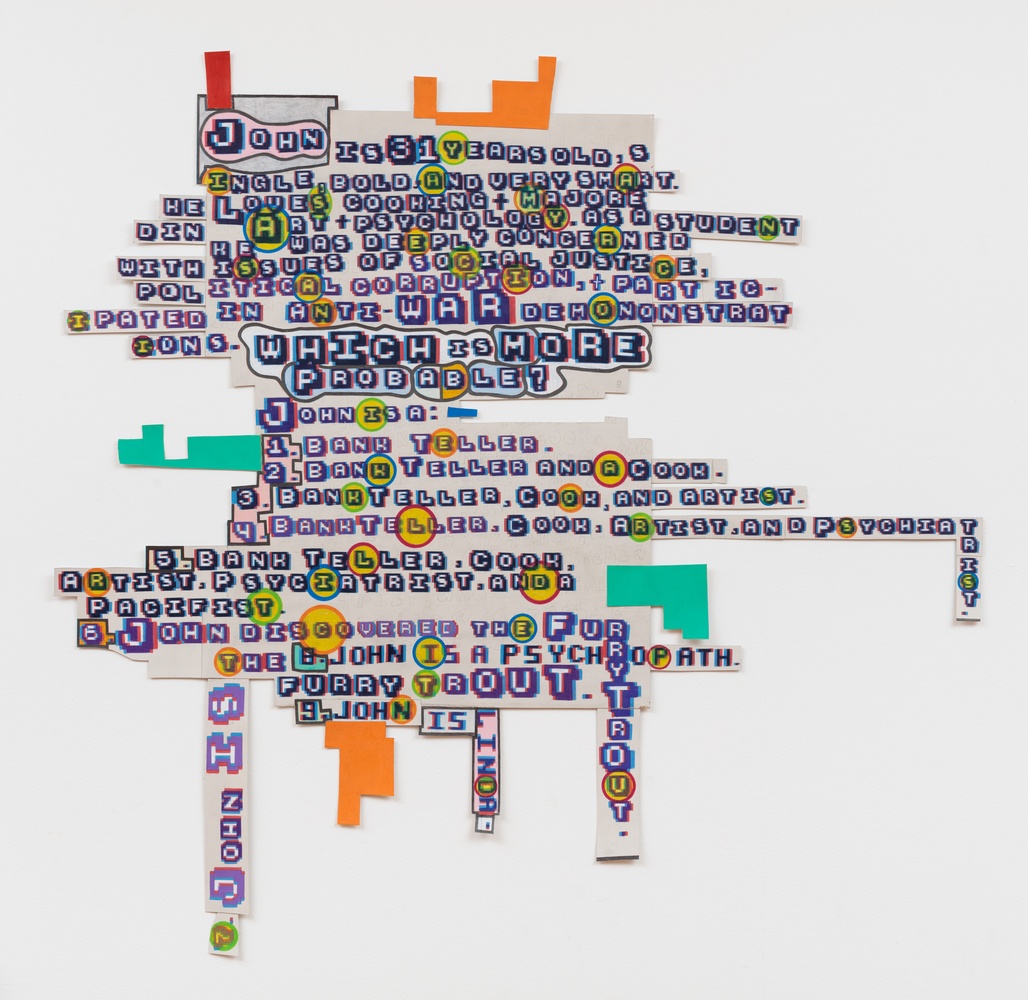 36.5 X 37.25 inches This drawing is based on the Linda Problem or the Conjunction Fallacy. The fallacy was first articulated by Amos Tversky and Daniel Kahneman, cognitive psychologists who did groundbreaking work on human decision making. I think that the conjunction fallacy occurs because we have an innate desire to believe coherent stories, particularly about people. In a sense, it illuminates how we see meaning where there most likely isn’t any. -------- The most cited example of this fallacy is the Linda Problem. The original is below, from Wikipedia: Amos Tversky's secretary at Stanford was named Linda Covington, and he named the famous character in the puzzle after her. Linda is 31 years old, single, outspoken, and very bright. She majored in philosophy. As a student, she was deeply concerned with issues of discrimination and social justice, and also participated in anti-nuclear demonstrations. Which is more probable? 1. Linda is a bank teller. 2. Linda is a bank teller and is active in the feminist movement. The majority of those asked chose option 2. However, the probability of two events occurring together (in "conjunction") is always less than or equal to the probability of either one occurring alone. Tversky and Kahneman argue that most people get this problem wrong because they use a heuristic procedure called representativeness to make this kind of judgment. --------- In my drawing, I substituted my name for Linda and made the problem more complex in order to explore a more nuanced version of truth in decision making – how descriptions of identity are inherently loaded with unknowns. In the drawing, John’s choices are more numerous and convoluted than were Linda’s, and contain references to less associative personality traits that are more psychological or emotional. An example is set of traits associated with the furry trout, which references a famous hoax that has persisted for years. I wanted the overall drawing to play with the idea of logic, conclusion, and predictability through the lens of a person’s career path and psychological identity. PROCESS: For the aesthetic, I used a 3-d video game font (the drawing can be viewed with 3-d glasses and will reveal an alternative hierarchy through spatial distance) as a way to get at the feeling of illusion in meaning. And the ‘real’ answer (of the drawing not the bigger questions of the fallacy) is that John is Linda, number 9. I wanted to imbed the answer into the aesthetic, so every 9th letter is circled in yellow. Also, I cut and pasted 2 pieces of paper to make the whole piece. I liked the idea that the drawing’s form and shape was being dictated by the words of the problem. It was like piecing the structure together in parts rather than knowing the whole all at once – I saw this as somewhat like the cognitive fallacy itself – can we know the whole of something through its parts, or is this a fallacy? That’s the John Problem.