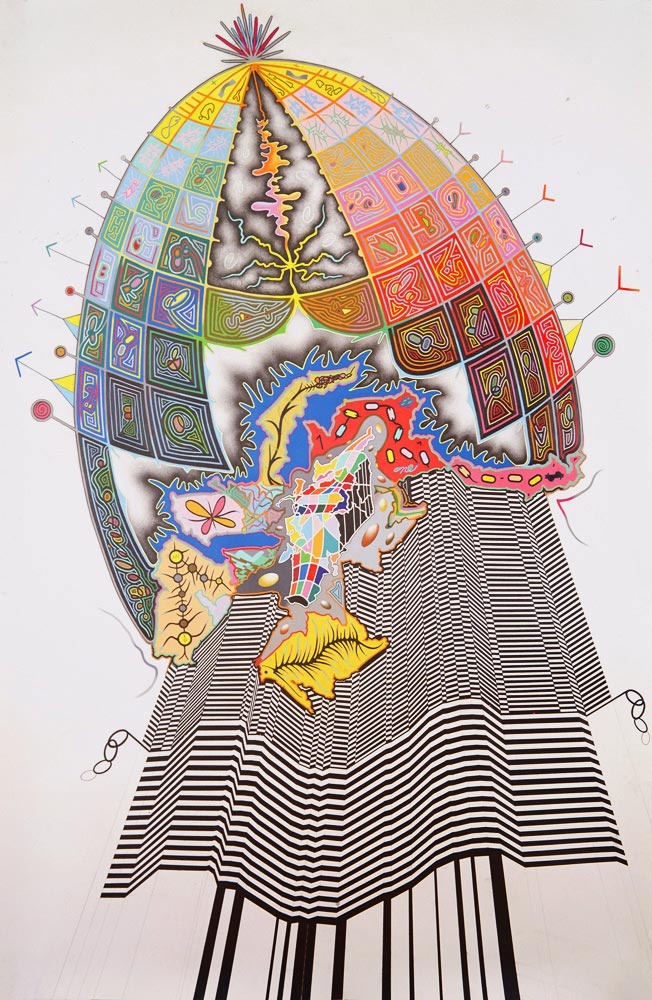 In making this work I attempted to explore the nuances of balance and separation as manifested in borderlines – manmade and self-forming. The central, structural lines of the drawing resulted from my random application of the borderlines between the US and Canada, and the US and Mexico. I initially made stencils from a small map and applied the resulting borderlines to the paper based on a system I invented, which was based on various sets of winning NY lottery numbers and originated in the center. If the lottery number was even, I applied the Canada/US border stencil. If it was odd, then I applied the Mexico/US border. The direction of the lines, ranging from North, South, East, West and all combinations in between, was also dictated by the given lottery number. Each line connected to the other, creating a complex, looping web of intricate contours. After I created this set of lines, I delineated the central island-like form. Within that island, I isolated another more 3-dimensional form/shape and colored its state-like sections with cool and warm colors. The black and white lower section of the drawing was my attempt to organize, through geometric repetition, the sprawling borderline combinations. The upper dome-like portion of the drawing contains a wide range of information relating to historical hierarchies and mythologies: Greek and Roman gods, the plagues of Egypt, prophecies of Nostradamus, and various conceptions of heaven and hell. In the central, shaded portion, the organic shape originated in an Oliver Sacks article on balance. I hand-copied two portions of his text in opposite directions and outlined the shapes in between the words. Other pieces of information are spread throughout the drawing and reflect my thought processes, information gathering, and aesthetic trials.