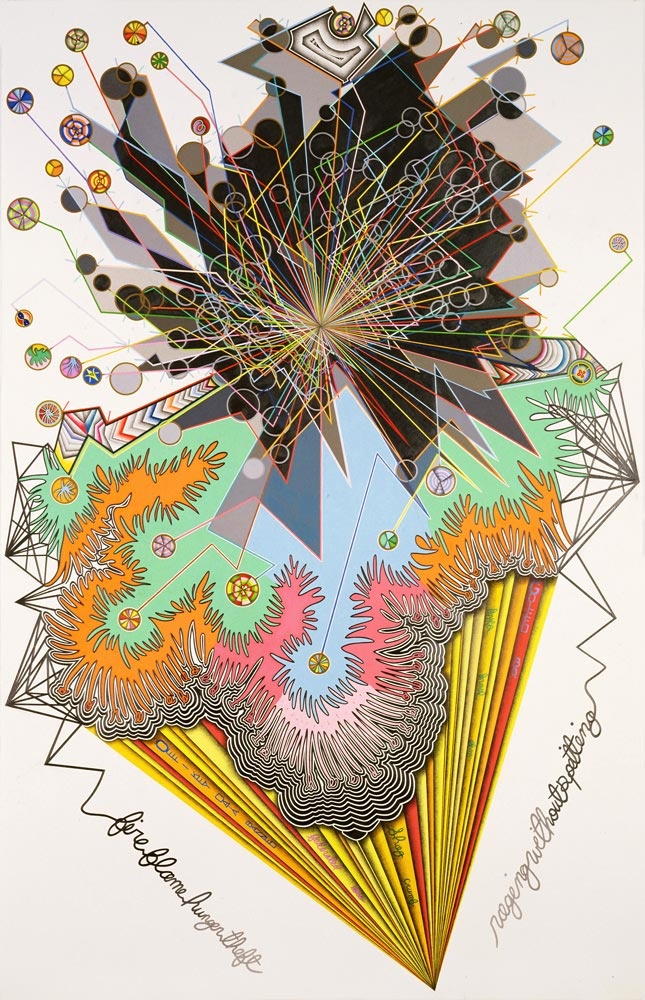 A Nostradamus prophecy predicting religious turmoil and wars was the foundation of this drawing. I began by translating three manifestations of the prophecy – the original French version, the English translation and the editor’s summary – into inches and centimeters. Emanating from the upper center, I plotted each letter of the original text in inches (A=1 inch, B=2 inches, etc.). I then translated the English version’s letters into inches and connected them to the original lines, at different angles. Finally, I connected the editor’s summary. The overlapping lines created a dominant inner shape, which I reinforced with solid graphite and grey colored pencil. Several lines extended outward from the perimeter of this form, which I capped with circles and filled with patterns derived from their distances from the perimeter. In the lower section of the drawing, there are other textual references to the prophecy. I counted the number of letters in each word of Nostradamus’s original writing, and chose an equivalent amount of random numbers (1 to 26). For example, if Nostradamus’s original written word had 3 letters, I then chose 3 random numbers from 1 to 26. I then re-translated these numbers back into letters and entered the random configurations into my pocket dictionary, which searched for the closest English approximation. The resulting words are interspersed throughout portions of the drawing. I also included the punctuation of the Nostradamus text, and a portion of his original writing appears outside the yellow bands, written in cursive.