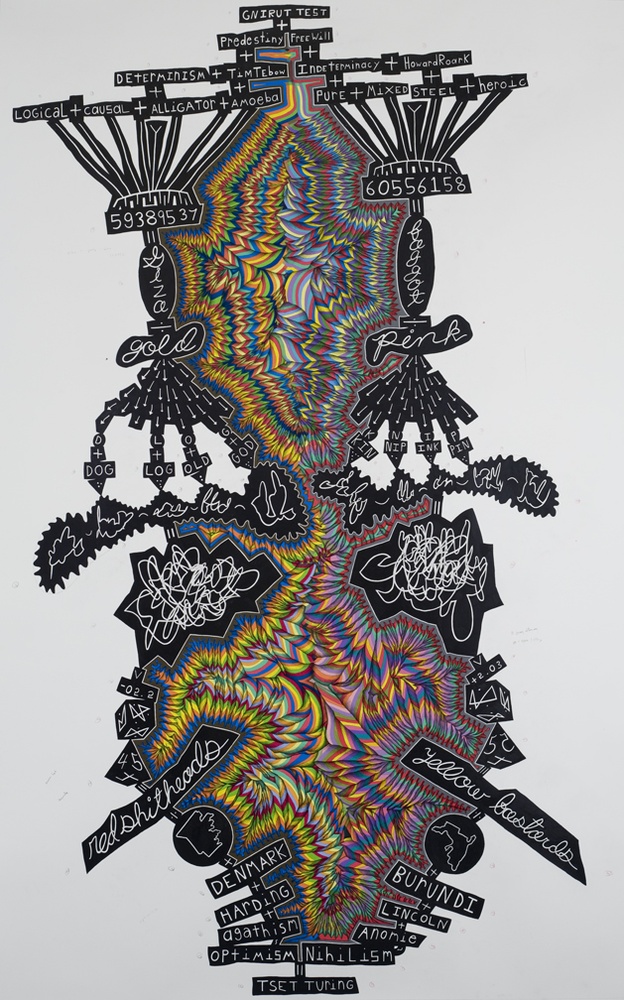 2010, Colored Pencil and Graphite on Paper

Alan Turing’s test for artificial intelligence – the Turing Test – was what inspired me to make this piece. Turing proposed the test in his 1950 paper Computing Machinery and Intelligence, which opened with the words: "I propose to consider the question, 'Can machines think?'" The test was set up as follows: a human judge engages in a natural language conversation with one human and one machine, each of which tries to appear human. If the judge cannot reliably tell the machine from the human, the machine is said to have passed the test – it is intelligent and can think. To start the work, I reversed Turing into Gnirut, playing with the idea of a human acting as a computer, trying to fake the computer into thinking it was talking to one of its own. This also led me to think about the differences between the ideas of predestiny and free will, a religious take on the Turing Test. I began the drawing with the text parts, starting at the top and moving down in two related but distinct columns. In each side, I continually alternated between my own free associations to words and phrases, and then tried to get a “machine’s” response, which I would then respond to, etc. I did this by deconstructing the text in any way I could think of – text into numbers, reversing the letters, using a coding system to transform the information. I never knew where this would lead me. One part of the process was particularly intriguing and haunting. The 2 large groups of numbers at the top part of the work (59389537 and 60556158) resulted when I added up each of the previous letters translated into numbers. I then re-translated these sets of totaled numbers into text – 59389537 became EICHICG; and 60556158 became FEEFAEH When I entered these letters into my electronic dictionary, the closest words that it discovered were Giza, and Faggot. I was shocked by the latter in that it seemed like the computer was becoming aware of Alan Turing’s past: Turing was homosexual, and was criminally prosecuted in 1952 — homosexual acts were illegal in the United Kingdom at that time — and he accepted treatment with female hormones (chemical castration) as an alternative to prison. In a sense, part of his life had to be hidden, or faked, in order for him to be able to do the work he loved. The computer seemed to be conscious of this in some way. Or it was completely random. Either way, when this happened in the process of making the work, I started to see it as something that really was acting on it’s own (consciousness or randomness), trying to communicate to me in a way, almost like a computerized Ouija board. The test was reversing itself.